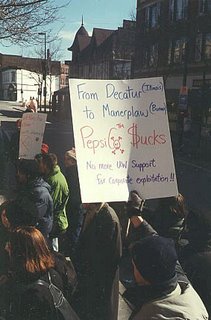 From 1991 until 1997 Pepsi invested in the Burmese military regime which is responsible for some of the worst human rights violations in the world. Pepsi's involvement saw one of the biggest Burma-related boycotts in history -on a par with those against Texaco, running around the same time, and nearly as large as the current boycott against Total Oil. Pepsi formally began their investment in Burma in November 1991 when they opened a bottling plant in the then-capital Rangoon, in direct contradiction to Aung San Suu Kyi's and the National League for Democracy's requests for no foreign investment in Burma until it returned to democracy. The campaign agaisnt Pepsi was initiated by the Asian-based Burma Rights Movement for Action but was not taken up seriously in the West as Burmese human rights groups at the time were focussed on Texaco, amaco and Petro-Canada. When Petro-Canada left Burma, however Canadian and US based Burmese demcoracy groups took up the campaign with huge dedication-it received a massive boost when, in 1996, the Free Burma Coalition took the lead in forcing Pepsi out of American Universities including the scrapping of a $1 million deal at Harvard. The campaign then began to spread to Europe where a huge boycott took hold. In response, in 1996 Pepsi attempted to step out of the spotlight by selling their Burmese investment to their sister company and making it a franchise. Aung Sung Suu Kyi responded "As far as we are concerned, Pepsi has not divested from Burma" and both human rights and environmental groups continued pressure on Pepsi. Eventually, with the Burmese regime holding violent anti-democracy rallies and pressure from around the world mounting, Pepsi cut all ties with Burma on 31 May 1997 but would never, as other companies have upon leaving the country, admit that it was morally wrong to invest in Burma.