Treatment of ethnic minorities-Burma is a country made up of many ethnic states and ethnic peoples. Whilst democracy campaigns focus of peaceful relationships between all ethnic groups (Aung Sung Suu Kyi has the support of all ethnic groups and the NLD is closely allied to ethnic parties such as the Shan National League for Democracy-SNLD) the regime and their thugs have long persecuted ethnic minorities. Among the worst persecuted are the Karen people, a mainly Christian minority from the South of Burma. The regime is committed to the destruction of the Karen race and frequently attack villages murdering all inhabitants including men, women, children and, sickeningly, infants.[1] The gradual destruction of the Karen people is a situation viewed by many world leaders as a current and ongoing genocide. The construction of a Texaco pipeline in the Karen region has been used as an excuse for soldiers protecting the pipeline to implement a shoot to kill policy in order to ‘protect the pipeline’. In reality this allows soldiers to attack Karen villages in the close proximity in an attempt to either destroy settlements or drive villages across the border into Thailand. [2]
Incidents of rape by the Tatmadaw (Burmese army) in ethnic nationality areas are documented in recent reports such as “License to Rape” (Shan Women Action Network), “Shattered Silence” (Karen Women Organization) and “Cat Walk to the Barracks” (Human Rights Foundation of Monland) [3]. The fact that the regime views ethnic minorities as sub-human allows soldiers to kidnap a 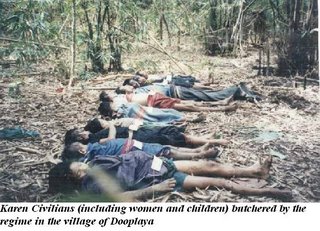 nd rape any women they desire from ethnic areas. In 2005 a fourteen year old girl was raped by sixteen soldiers guarding Total’s pipeline in the Yanda region, an incident that Burmese authorities attempted to silence by threatening the girls family.
The National Coalition Government of the Union of Burma, an exiled government made of a representatives legitimately elected in the 1990 election have recently documented,
“Increased deployment of armed forces in areas of ethnic nationalities and persecution of civilians resulting a massive displacement of people”
Furthermore they highlight the risk of civil war created by the regimes arrest of ethnic leaders in the Shan region. The regime frequently vilify ethnic militia groups such as the Karen National Union, created to defend their people from the Burmese Army. In 2003 many people were killed in bomb blasts in Rangoon, attacks which appear to have been carried out by the regime itself in order to blame the KNU. This demonstrates the regimes willingness to kill innocent Burmese civilians in an attempt to vilify those brave enough to defend their people. In 2006 the regime broke all rules of war by attacking a meeting of the Shan State Army. The SSA was on a ceasefire and leaders were meeting for a discussion when Burmese troops deliberately shelled the building in an attempt to murder prominent Shan generals posing no threat.[4] This is further illustrative of the murders the regime is prepared to commit in order to suppress the ethnic minorities of Burma.

[1] Burma Campaign UK
[2] There are frequent accounts of Thai authorities arresting Karen refugees and demanding large sums of money. If this sum is not raised and handed over the Karen are deported back to Burma for execution
[3] Nation Coalition Government of the Union of Burma (in exile)
[4] Rebound 88